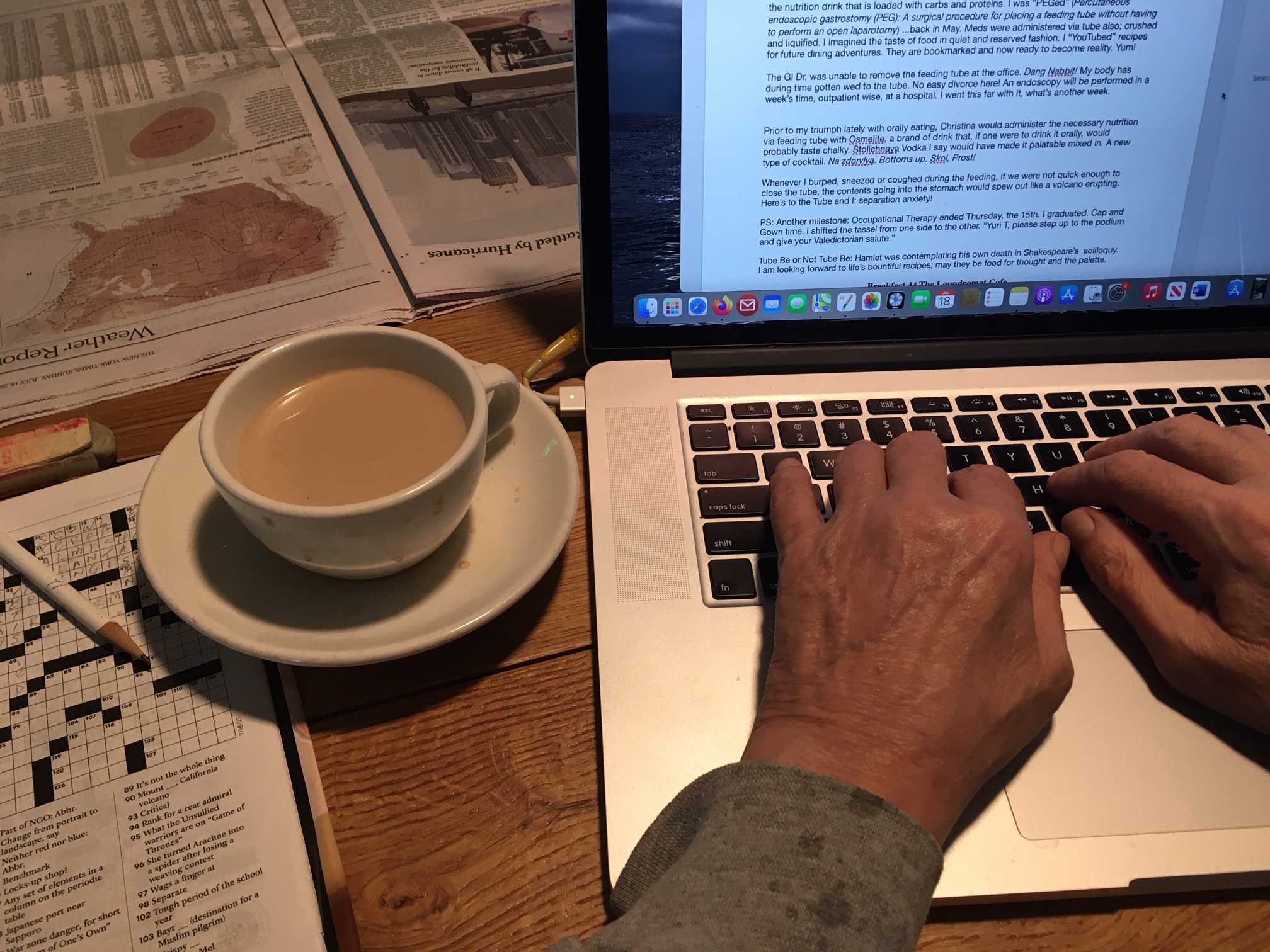 Coming home from Rehab felt like a triumph. The first two weeks were tough physically and mentally. Emotionally, it was heaven. It’s the Quiet that makes me content. Everything else will happen in good time.

There was a nuisance with the nutritional intake. Loaded with carbs and proteins, it still had to go through a tube feeding, a “PEG” (Percutaneous Endoscopic Gastrostomy), a surgical procedure for placing a feeding tube without having to perform an open laparotomy (a surgical incision into the abdominal cavity). This was done on May 25th. Many moons ago.

Christina was skeptical at first. She didn’t want to have anything to do with it. But after realizing the number of calories, vitamins, and nutrients necessary she complied. Meds would be administered via tube as well; crushed and liquified along with the Osmelite, a brand, if one were to drink it orally, would probably taste chalky. A new cocktail with Stolichnaya Vodka mixed in I say would have made it palatable. Na Zdorovlya. Bottoms up. Skol, Prost!

However, it wasn’t always so simple. Whenever I burped, sneezed, or coughed during the ritual feeding, if we were not quick enough to close the tube, the contents going into the stomach would spew out like a volcano erupting. Here’s to the Tube & I– separation anxiety!

Eating became an obsession. I imagined the taste of food in a quiet and reserved fashion. Salivating over “YouTubed” recipes saved for future dining adventures. They are bookmarked and ready to become reality. After graduating from mashed potatoes to solid food for almost a week, Christina and I were at the Gastroenterologist’s appointment, requesting the doctor remove my feeding tube. She said “Yes.” I was excited to the max.


Despite a good yank at the tube, she was unable to remove it at the office. Dang Nabbit! During the long time since its insertion, my body has gotten wed to the tube. No easy divorce here! An endoscopy will be performed in a week’s time, outpatient wise, at a hospital. I went this far with it, what’s another week.

PS: Another milestone: Occupational Therapy ended. I graduated. Cap and Gown time. I shifted the tassel from one side to the other. “Yuri T, please step up to the podium and give your Valedictorian salute.”

Tube Be or Not Tube Be: Hamlet was contemplating his own death in
Shakespeare’s soliloquy.
I am looking forward to life’s bountiful recipes; may they be food for thought and the palette.

Breakfast At The Laundromat Cafe

Reykjavik diary.
Flight lands
Dark in cold summer August.
Afghani bus driver speaks of his home and her…
His spouse a native Icelander.

We arrive at the Laundromat Cafe;
Opens for morning repast mass.
Locals, tourists stream through
Passing the basement of wash loads while the coffees brew.
A “Dirty Breakfast: took my cash.
I broke a tooth on volcanic ash;
A hidden gem in my breakfast food.
It was not on the menu.