Observation of the Little Things 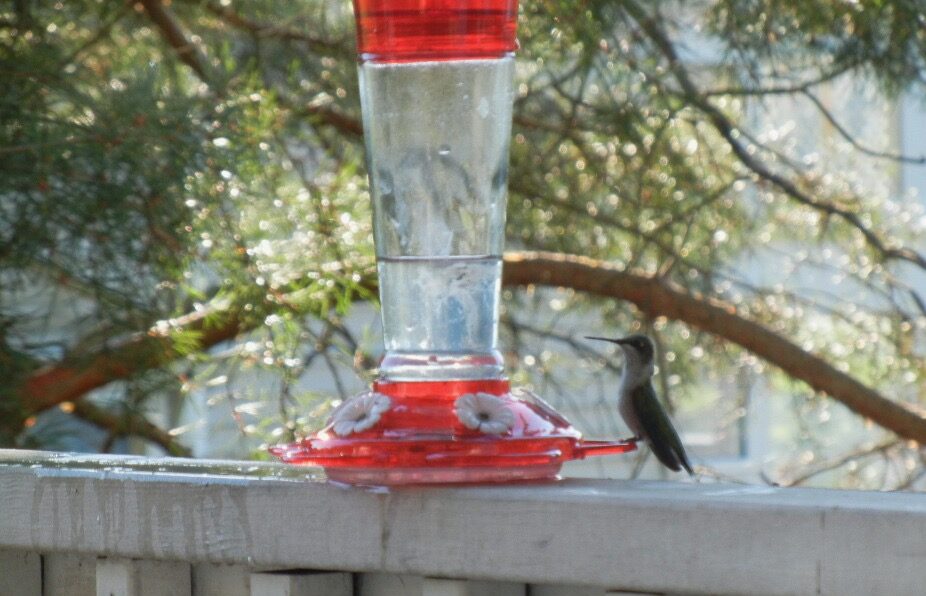 Our dining table-turned workstation keeps our minds exercised and focused while the body instrument heals. Most instances of the numerous medications and medical equipment are gone, replaced with a five-string electric violin, guitars, mixers, headphones, and cables connecting to the MacBook Pro and onto the next level of LogicPro. Yuri is determined to stay on top of audio “technica” the latest equipment and engineering practices pursuing excellence as the listenability guru, an acoustic sculptor, a room tuner. I may be the visual artist, a spatial cadet, a nature observer, but every room we’re in is a comfort zone for work as well as the evening debates and discussions. A glass of wine. An overview of the day.

Most days start with us together; however, as I face the sliding glass doors out to the lakeside, I find myself mesmerized by the hummingbirds that visit feeders I put out. There are times when I’ll move out to the “observation deck” and settle for a while watching this amazing little creature beating its wings more than eighty times per second, seemingly at a standstill in the air, then dive bombing at another intruder while it protects its feeding source – sugar water in a glass container. According to worldbirds.com When a hummingbird is visiting you, it brings good news. If you passed through difficult times, the hummingbird tells you that it’s over.

Yuri’s violin was giving him a bit of trouble today. Not wanting to be tuned. Tightly wound since his absence, his fingers that still don’t have the strength to negotiate the tuning pegs and its obstinate strings. The time I brought it to rehab per his request, Yuri had no strength to even lift its neck, never mind holding it, plucking it, playing it. Even Nell got into the act trying to give Yuri a helping paw as he attempts to cajole it with a dab of imported olive oil, organic soap, a touch of WD40 – all without success. Unable to maneuver, it’s like a congressional setting. Give it time, he says, so I take the time to observe hummingbirds.

Hummingbirds are extremely territorial and a sparring contest has been going on for weeks. I watch their maneuvers and highly synchronized displays of defensive attacks on this food supply, dive-bombing to protect their source, and what I found is a way they show off to potential mates their prowess and ability as providers. At first, I put out the store-bought stuff tinted with red food coloring. I wondered how their tiny systems could process such chemical intrusion, but there’s little availability in flowers at this once-great country club setting, especially brightly-colored that are tubular (these hold the most nectar). I don’t see many perennials around here either– bee balms, columbines, daylilies, foxgloves, and or hollyhocks. Instead, I provide non-GMO sugar in boiled water. Having a natural alternative to the synthetic compound is what I keep a lookout for healing and healthy living.

It’s a month since Yuri came off the very powerful steroids. I’m still unsure of all the side effects since I was never made fully aware of them. Currently, we remain in observation mode since daily attention to detail provides clues that can often be overlooked or dismissed by the patient, caregiver, and doctor. I’m not sure how the doctor can maintain a diagnosis and continue prescribing physically altering medications without seeing the patient more often than just once a month if that. We now have three-month visits for a follow-up yet Yuri is strongly advised to stay on the medications that were, most certainly necessary during the days, weeks, and months after discharge, but almost two months have passed with little or no change in the amount according to doctor’s orders.

Accuracy of observation is the equivalent of accuracy of thinking –Wallace Stevens. And we shall remain that way. It’s becoming a regular way of living as we believe that the observation of nature is part of an artist’s life. Just the other day, the decision over the more dominant male came to a conclusion when I saw a pair of hummingbirds happily imbibing on their Cosmopolitan-colored cocktail. I moved the second feeder to the upstairs deck offering the other male a consolation prize. Nell’s personal observation turns into a yawn. Yuri finds the right tool (a string winder) to actually twist the knobs into cooperating submission. It worked. I saw the patience and light touch because he is constantly in tune with his violin’s nuances. We’re working on that for him.