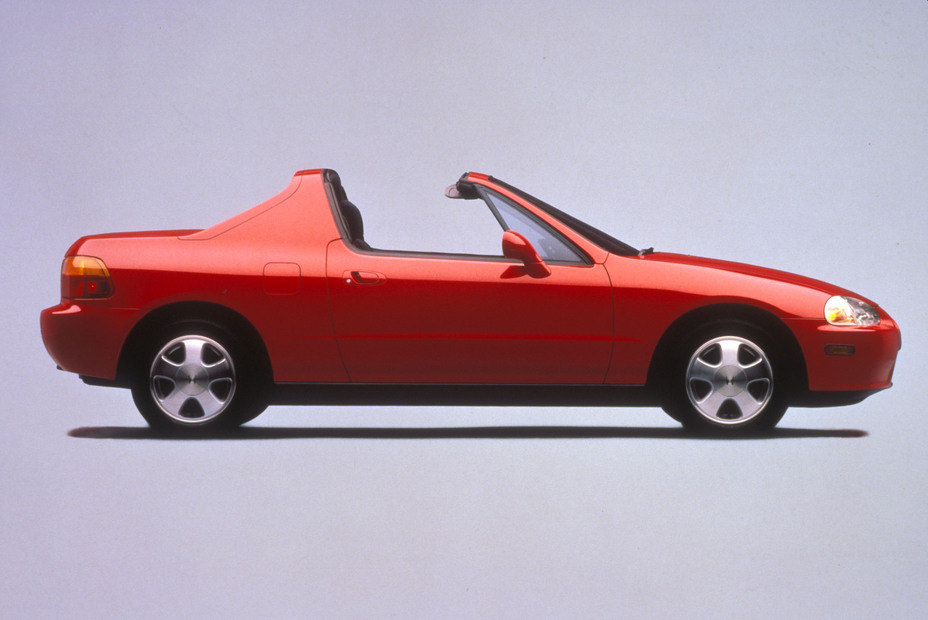 Having my 1993 Honda del Sol car for so long – 28 years– gives me pause at how “Little Red” lasted thus far and continues to be our Therapy car. It was the billboard that caught my eye back in the day along Route 46 where the old Howard Johnson’s used to be. There were several eye-catching signs promoting this tiny two-seater with a big trunk (11 cubic feet, versus the Miata’s paltry 8 cu ft). One big title “SPF 8” over a shiny fire engine red car with the removable top off. It hit me like a brick. After much research, I found the other ads enticing: “To Air is Human” and “Measuring Coupe.”

Little Red was one of the first things Yuri mentioned when he came out of deep sedation and hallucinatory dreamland. A ride to Point Judith and Block Island, clam chowder, and sunsets at Salt Pond. Only it wasn’t the right time because he couldn’t move his torso never mind walking to the car and getting into its low-to-the-ground seating.

Nevertheless, I brought Little Red to Tony & Sons for a major tune-up and refurb hopefully in time for our rescheduled trip to Block Island in September. I have no doubts we’ll be there. She’s still at Tony’s while we keep our Toyota Highlander in shape following three months of long haul commuting to Westchester, NY and then to Chester, NJ.

Thursday morning grueling schedule has Yuri working with Mike, Physical Therapist while I run (literally) errands to the bank and post office then wait for Tony to finish the oil change noticing the car inspection expired June 2021. Small things can snowball into bigger headaches if stopped by a roadblock checking such things. Very different times from when going for inspection meant waiting online for hours especially at the end of the month. Not a priority.

The priority was seeing Yuri taking measured steps walking around the room and practicing raising his feet to take the two steps that were an impossibility a month ago. The Physical and Occupational Team are so intuitive with what is absolutely essential for us to maneuver independently, this time to a doctor’s appointment in Morristown. Getting him up the two steps, outside, down the stair lift, and into the car just making it before an impending downpour was much easier than the first week. Along with the additional rolling walker, as well as the transport wheelchair, we filled to the gills, all set, and mobile.

Six weeks ago, Yuri was still in the ICU adamantly asking for me to go out and get him a beer. Very adamant. This past week at the renal doctor’s office he was told he could have a beer or wine but has to keep a low potassium diet. The Doctor is pleased that all things considering what he went through, Yuri’s lungs are healed and kidney on its way– no change in meds but will see him in a month. On our ride back, he experienced his first Jumboland Diner Drive-Through and upon arrival into our home, walked down the two steps in the foyer without hesitation. The miracle of Yuri’s discipline and motivation over his bodily mechanics never ceases to amaze me.

Along with the Dietician’s telemedicine call about the amount of soft food Yuri is now able to handle, she will convert it into the necessary caloric and nutrition he will need to gain some of the weight back improving his strength and muscle tone. We got a list of foods he could have for a low potassium diet with all values in milligrams, so yesterday I spent half the day in Shop Rite trying to figure out and convert the grams and ounces into milligrams. I never thought I would be so involved in metric conversions and how much I will be using a measuring cup. All I knew a long time ago was the billboard sign Measuring Coupe meant a therapy ride down an open road.