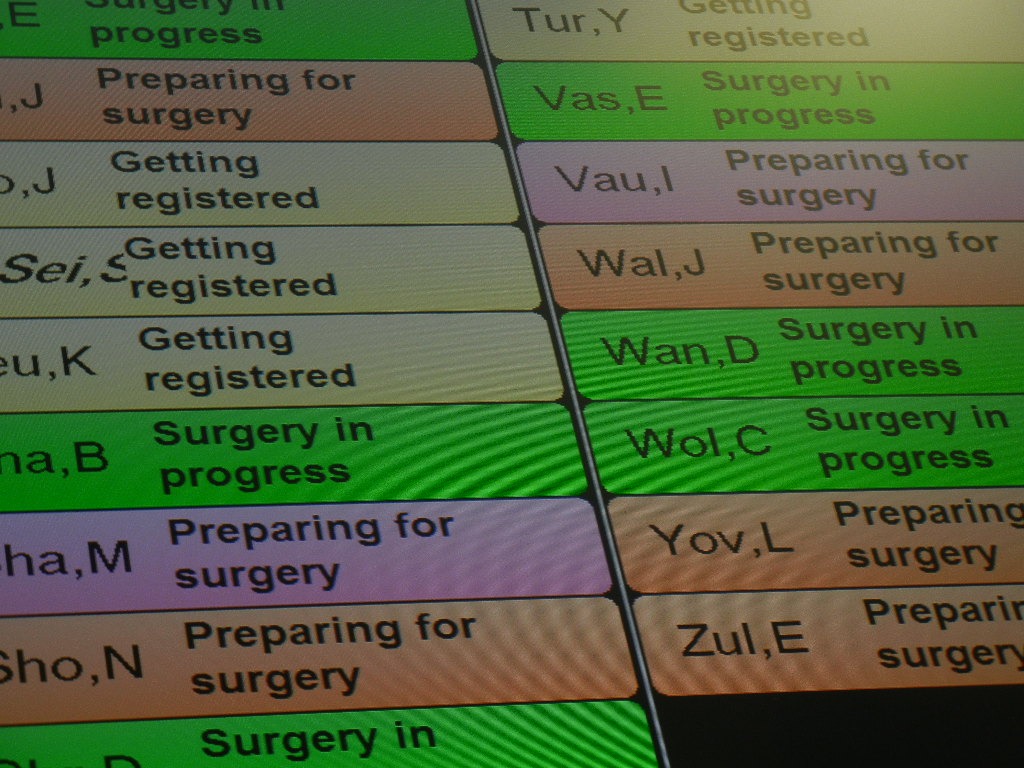 Today, I sit in the waiting room of Mount Sinai Hospital, New York City glancing at the lighted board reminiscent of being in an airport watching Departure times especially when there’s a connecting flight. This surgery is for getting Yuri’s voice back. He went in a little while ago and I left him in good spirits.

We were up at 4 a.m. this morning as that’s the time he was allowed breakfast and nothing more until after surgery. The drive took us along the back roads cutting through the mountains onto the Palisades Parkway, the same road I would take in what seems eons ago, only a little over six months actually. The scenery is a stark change from the carpet of greens changed to ochres and now a muted slew of browns, taupes, and warm grays. A light frost covering clings to the bare branches hanging low in the clouds touching the mountain tops.

This board reads Yuri is in the prepping for surgery stage. Pink light.

Despite the din of the waiting room where people wait for their loved ones to reappear from the blur of medical scrubs in corridors busy with operating schedules, I reflect on the past few days, the last days of November, our anniversary celebration month. Over a decade ago, we exchanged vows for better or for worse, for richer or poorer, in sickness and in health and we meant it. Interestingly, I’m sure most people who get into such an arrangement would feel as we do, but that’s not always the case. There are times when mistakes occur with the choices made. Been there. Done that. Not once. Twice.

It didn’t seem to be such a big deal at the time. Egad, I was so young, naive, and obtuse when I didn’t see persons who had caring feelings for me opting for the opposite and having to deal with those who took me as an acquisition, a pretty thing that can be controlled, told what to do, scolded for whatever went wrong. It didn’t matter what it was, seemingly, I was always at fault. It was a miserable time, but it made me strong. I don’t let anyone take advantage of me no matter who they are.

Just as I came into my own, I had friends who went through their own versions of the “almost commitment relationships” to “committed marriages that just didn’t work out.” They had the guts to get out of the situation. I did, too. It wasn’t easy, especially financially, the nonsecure security issues, the “this is what you should be doing” issues. There was hesitation at times. I read it could take seven tries before the actual time comes to making the move. I don’t regret it. It cleared the way to find the right person. The one.

Still watching the board. Surgery in progress. Green light.

On the other hand, Yuri opted not to marry at a young age. He married and remains faithful to his music. Committed. For better or for worse, for richer or poorer, in sickness and in health. His voice, a cherished instrument just as cherished as his Martin guitar. He made choices that were not always in his best personal interest, but he made wonderful music, songwriting, lyrical poetry coming from the sound of his beautiful instrument, his voice, and fingertips off guitar strings, drawing the bow drawing across his violin. He remains true to his vows and vocation. It chose him. He’s in it for life.

Just as when our eyes met across the room so many moons ago, when I left Yuri on the stage late one New Year’s Eve night as he pondered making a choice that would change the rest of his life, we still gravitate to a little warmth, a friendly conversation of thoughts and moments of revelation that we love being in one another’s company. Vinyl records and foreign films remain our passion, tequila shots turned into wine-sipping but the slow dancing in the dark that captured our intensity for one another endures.

While real-life scenarios that come with reeling in the years mellowed us a bit, we formed a more solid union than ever before and definitely for the rest of our lives. It doesn’t seem very long ago that we crossed Abbey Road, took the ride to get to where we are going that remains a mystery, a magical mystery tour, a known unknown in our unexpected present. Still waiting in the Waiting Room. It doesn’t get easier, and it’s an effort well worth the time.